B-Gateway is a code name for a web service that allows a merchant to obtain authorizations for credit card transactions and to submit transactions for clearing and settlement.

B-Gateway’s key features enable the user to do the following:

Get authorizations – allows the user to either make a normal purchase transaction or to pre-authorize it.

This feature also allows the user to make a refund transaction if he wants to refund an amount to the cardholder’s account.

Cancel authorizations – allows the user to cancel previously authorized transactions. Authorizations can be cancelled if the batch they belong to is still open. If it is closed then a refund transaction must be used.

Create new batches – allows the user to create a new batch. By doing so the user closes the currently open batch and opens a new one.

Get batch authorizations – allows the user to authorize many transactions as one batch.

Get processing results – allows the user to get results from previous batch job.

Send detail data – allows the user to supply detailed invoice after the financial transaction has been processed.

A batch is a unit that the acquirer uses to settle with the merchant. It is a collection of credit card transactions charged over a period of time, usually one day.

Each batch is identified by a batch number and this batch number must be unique per terminal within one year. The batch number can either be controlled by the merchant or the authorization services. This will be explained later.

B-Gateway will expose the authorization services with the use of web services. The web services run securely over HTTPS.

All web services provided by B-Gateway will be password protected. The connecting merchant has to supply username and password each time the merchant calls a B-Gateway web service. 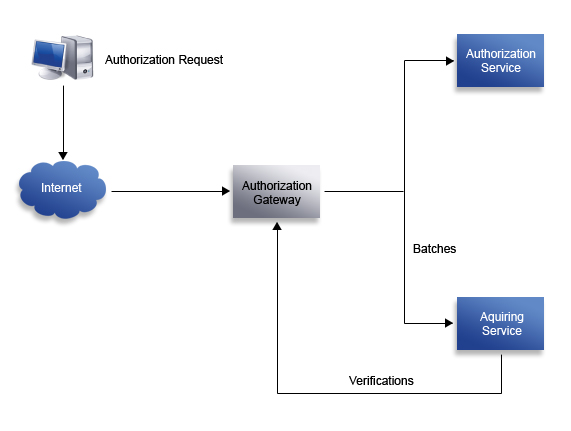 The security of cardholder account data has become one of the biggest issues facing the payment card industry. Visa and MasterCard have therefore created the Payment Card Industry Data Security Standard (PCI DSS) – a set of industry-wide requirements and processes, that are supported by all international payment card systems.

PCI DSS is intended for any organization that stores, transmits or processes cardholder account and transaction data – merchants, acquiringbanks and related service providers.

The PCI standard is available at https://www.pcisecuritystandards.org Please download and review the standard.

While all merchants are required to comply with thePayment Card Industry Data Security Standard, merchants that store, process or transmitcard account data may also be required to validate compliance with their acquirer. Please note that for a merchant to be considered compliant, any Service Providers that store, process or transmit card account data on behalf of the merchant must also be compliant.

Amounts
All amounts are represented with two digits after the decimal and an implied decimal point. Icelandic Krona is therefore represented in aurar. Dollars are in cents etc. For instance 100 USD is in TrAmount as “10000”.

This element is referred as TransType 1 in the XML sheet. If you wish to make a normal purchase transaction you can either insert a variable in the AuthCode in the XML sheet or leave the field empty.

If the transaction has already been authorized by the pre-authorizing element or by other channels the AuthCode will contain the auth code that was received during the preauthorization process. This is sometimes referred to as submitting financial transactions. In this case B-Gateway will store the financial transaction in its database and not request authorization from the issuer to ensure that the card account does not get reserved twice. B-Gateway will then later submit the transaction tothe acquirer automatically.

In either case the transaction number and batch number are always returned from the web service. If Transaction and Batch variables are notset in input requests they are created and returned in the response.

This element is referred as TransType 3 in the XML sheet. This transaction type is used when a merchant wants to refund an amount to a customer. If the refund is successful the response to the merchant contains the AuthCode of the reversal, as well as Transaction and Batch numbers. In other case the response contains an error code.

This element is referred as TransType 4 in the XML sheet. This transaction type lowers the amount on a currently existing sale and advices the issuer to change the cardholder’s withdrawal limit by the same amount. The transaction type can only be used on a sale created on the same day and therefore in an open batch. The message must contain the original amount, and the new amount.
If the partial reversal is successful the response to the merchant contains the AuthCode of the reversal, as well as Transaction and Batch numbers. In other case the response contains an error code.

The Payment Gateway does support zero amount to be sent to verify cards for MasterCard and VISA. The only requirement is that the authorization must be a pre-authorization. This is most often used in recurring sales.

The merchant contract numbers have to be specifically configured through business channels to allow use dynamic descriptors, if not then these parameters will be ignored.

Name, ZipCode and City can contain AlphaNumeric letters along with common characters such as *, +, - _ . While no characters are explicitly forbidden then the reality is that several issuer dislike uses of characters such as &, <, >, ?, /,. \ and they should be avoided.

All parameters must be completed and contain correct data if dynamic descriptors are to work
MasterCard has a restriction that requires home, zipcode and country to referr to an actual address.fs

Refund and Partial Refunds must refer to the original transaction by having exactly the same DateAndTime and RRN as the original authorization.

GAXML.1 – An example of authorization request

GAXML.2 – An example of an authorization capture

GAXML.3 – An example of refund of sale

GAXML.4 – An example of partial reversal of sale

GAXML.1 – An example of authorization request with Dynamic Descriptor

The card number and amount must be the same as in the original transaction. In the event of an error, such as timeout in communications, the RRN number of the transaction in the error must be included in the cancelling process.

CAXML.1 – An example of sent XML

Credit card numbers need not be sent into getAuthorization, instead virtual card numbers can be used. This enhances security as it eliminates the need to store sensetive credit card information in local data sources.

VCXML.1 – An example of sent XML

If the currently open batch has no transactions associated with it, the batch will be considered as being the new batch, thus it will not be closed nor will a new batch be opened.

Batch numbers controlled by the merchant

CNBXML.1 – An example of a sent XML

Client applications can request a transaction list from the authorization service listing on either batch or transaction level details about transactions processed through the service.

Tables TL.2 and TL.3 – Field explanations for a received XML

Explanations for each transaction within the batch

TLXML.1 – An example of a sent XML

Dispute types returned are as follows

The chargeback list describes the communication between acquirer and issuer during dispute, a path for a long running dispute might becreating the following four records

A rare occurrence that still happens once in a while is double registration of chargeback.

DTXML.1 – An example of a sent and received received XML

Client applications can request a list of fraud transactions.

DTXML.1 – An example of a received XML

Settlement can contain one or more batches, and each batch contains one or more transaction.

Settlement data can be fetched with the following calls

Getting a list of transactions in batches. BatchDate and BatchNumber are unique for each batch.

SDXML.5 and SDXML.6 – An example of a received XML with settlement and deduction

SDXML.8 – An XML example of a received transaction list

SDXML.9 – An XML example of a received chargeback list

SDDXML.1 – An example of a sent XML

This addition to getAuthorization is used to supply passenger itinerary data after the financial transaction has been processed. It currently only supports itineraries with four legs or less.

SDDXML.1 – An example of a sent XML

Below are a few demos that can be downloaded to get started.